By tradition, the Catholic Church dedicates each month of the year to a certain devotion. The month of October is dedicated to the holy Rosary, one of the best known of all Catholic devotions. According to an account by fifteenth-century Dominican, Alan de la Roch, Mary appeared to St. Dominic in 1206 after he had been praying and doing severe penances because of his lack of success in combating the Albigensian heresy. Mary praised him for his valiant fight against the heretics and then gave him the Rosary as a mighty weapon, explained its uses and efficacy, and told him to preach it to others.

The Holy Rosary, also known as the Dominican Rosary, or simply the Rosary, refers to a set of prayers used in the Catholic Church and to the string of knots or beads used to count the component prayers. The prayers that compose the Rosary are arranged in sets of ten Hail Marys, called decades. Each decade is preceded by one Lord’s Prayer (“Our Father”) and traditionally followed by only one Glory Be. Many Catholics also choose to recite the “O my Jesus” prayer after the Glory Be, which is the most well known of the seven Fatima Prayers. During recitation of each set, thought is given to one of the Mysteries of the Rosary, which recall events in the lives of Jesus and of Mary. Five decades are recited per rosary. Rosary beads are an aid towards saying these prayers in the proper sequence.

The Rosary draws its mysteries from the New Testament and is centered on the great events of the Incarnation and Redemption with each decade referring to an event in the life of Jesus and Mary. The Mysteries of the Rosary give us “thumbnails” of the life of Christ and his Mother.

The Feast of Our Lady of the Rosary is on October 7. The best way to celebrate the month is, of course, to pray the Rosary. 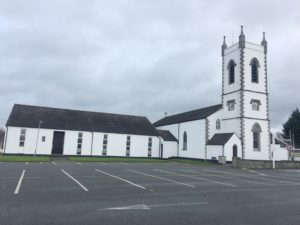